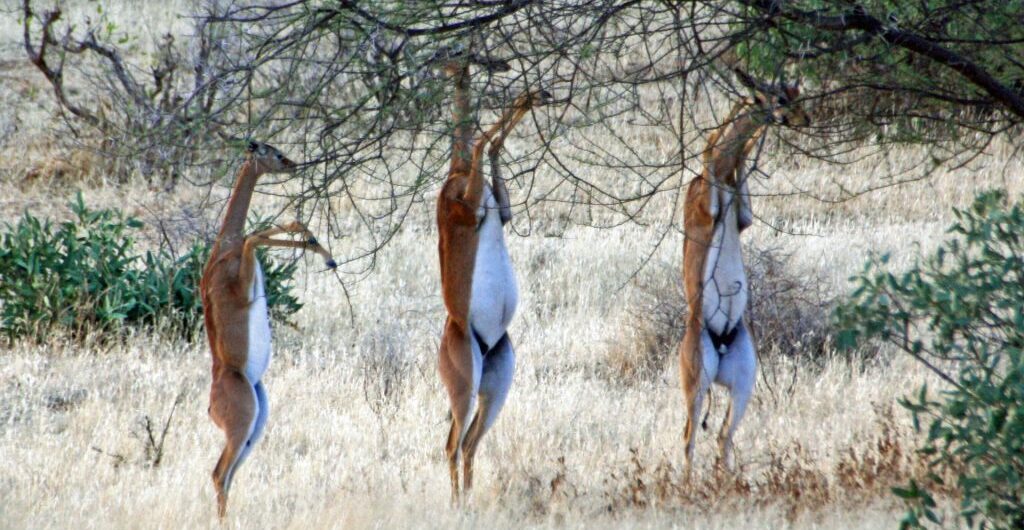 Samburu National Reserve is located on the banks of the Ewaso Ng’iro river in Kenya; on the other side of the river is the Buffalo Springs National Reserve in Northern Kenya. It is 165 km² in size and 350 kilometers from Nairobi and ranges in altitude from 800 to 1230m above sea level. 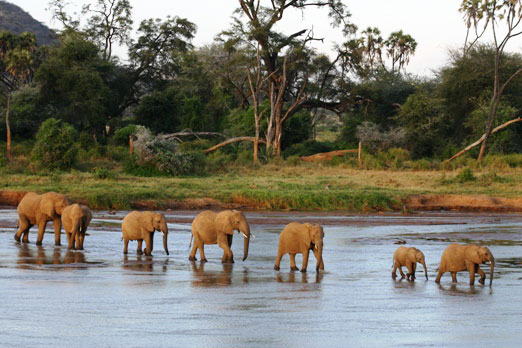 The presence, however, of the river – and its shady trees – attracts plenty of wildlife. Giraffe, buffalo, waterbuck and zebra (including the endangered Grevy’s zebra) from the surrounding savannah plains trek to the water.Lion, leopard and cheetah are also quite easy to spot, thanks in part to the lack of grass cover. Samburu is also home to large herds of elephants, and the reserve is well known for providing the opportunity to see wildlife that only lives in the dry north of Kenya.

Be on the look out for gerenuks – these odd, yet distinguished looking, gazelle have long necks, and stand on their hind legs to feed.
For the birders, around 365 species have been recorded and the river area is particularly rewarding. Across the river is the Buffalo Springs National Reserve. A bridge connects the two, and they are often grouped together by tour companies. Nearby is the swampy wilderness of the Shaba National Reserve.
There is a good selection of safari lodges and luxury tented camps in the Samburu Region. Samburu Intrepids and Samburu Lodge are just two of them.

The Samburu National Reserve was one of the two areas in which conservationists George Adamson and Joy Adamson raised Elsa the Lioness made famous in the best selling book and award winning movie Born Free.